Frankincense: how the aromatic holiday scent is making a comeback

An article by Allison Brooks, B.S. in Biomedical Anthropology.

As the holidays creep up among us and our houses start to smell of cinnamon and sweet pumpkin pies, I bet no one had a second thought about the effect of those scents on the body and mind. Certain scents open different parts of the mind and body to produce positive effects. And if you don't think this is true...think again.
Even the most simple of scents has an effect on a person's mood and his/her attitude towards certain situations. Smells and scents have an effect on just about everyone! This is why we invest time and considerations in the perfumes we buy, the air fresheners we use in our homes and of course holiday scents. 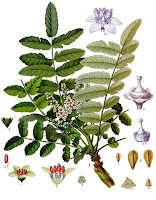 The most notable and probably most historic holiday scent is frankincense. The widely used aromatherapy resin has been used for generations to clear the mind and open the soul. In the Papyrus Ebers of 1500 B.C., priests recommended frankincense for the treatment of wounds. Other ailments it was once reported to cure include hemlock poisoning, leprosy, worms, snakebites, diarrhoea, plague, scurvy and even baldness!
Frankincense is mostly known for its presence in the story of the three Wise Men visiting baby Jesus and in religious ceremonies, but never for clinical trials right?
Well, now frankincense is making a comeback by being used in laboratory and clinical research as a possible integrative therapy in cancer treatment! Scientists have observed that frankincense has a re-set function which stops cancer spreading. Actually it separates the nucleus of the cancerous cell from the cytoplasm, making it unable to reproduce corrupted, cancerous DNA. This is a major development in research concerning cancer treatment, since frankincense might not negatively interact with healthy cells, unlike chemotherapy.
Even though there is no concrete scientific evidence so far that aromatherapy could cure chronic diseases such as cancer, it is suggested by many health care providers that it may enhance the quality of life in patients. As stated in the Mesothelioma Resource Online site "patients diagnosed with mesothelioma, or other cancers and illnesses, might consider an alternative therapy such as aromatherapy in accordance with their standard treatments. Clinical trials for aromatherapy have shown that essential oils may be a supplemental treatment to reduce pain, nausea, anxiety, stress and depression."
Practicing aromatherapy sessions or taking classes to learn the helpful components of aromatic herbs and oils could be very helpful for cancer patients. Aromatherapy sessions can help with relaxing the mind and body and it is well known that during stressful times good physical and mental condition are key to promoting immune system function. Aromatherapy classes could also give to the patients a sense of control when life might seem out of their reach.
Who would have thought over nine thousand years ago that a cleansing and curative plant would be in the centre of the medical research of tomorrow?

About the author: Allison Brooks is a graduate of the University of Mississippi. She has earned her B.S. in Biomedical Anthropology and is currently studying in the field to finish an ethnography on the effects of biomedicalization on Bolivian cultures. She is a fan of alternative therapies and traditional medicine and would like to spread the word about their effectiveness.