Do you remember the Ents, a race of elderly creatures in the movie "The Lord of the Rings" who looked very much like trees?
I love nature since I was a child, but I have to admit that this certain movie and the way it presented the treelike, wise guardians of the wood and their relationship to people changed a lot my perspective on trees. 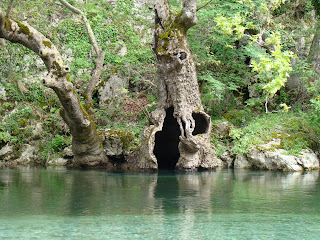 We all know what trees offer to our ecosystem. They play an important role to oxygen production while absorbing carbon dioxide, prevent the corrosion and control the temperature of ground. Trees are also used to improve the aesthetics of a space, many species produce eatable fruit with precious nutrients and their wood is useful in energy production or as a construction material. Their foliage is offering shade during the hot summer days and serves as a shelter for birds, insects and small mammals.
It is therefore understandable why trees are part of many counties' mythology. In Greek mythology the Olympian gods transformed the beautiful princess Phyllis into an almond tree when she died of sorrow while waiting for her husband to return home. The fir resulted because Pan transformed into that tree his beloved nymph Pity, while cypress grew as a result of the transformation of young Cyparissus, who requested punishment from the gods when he killed by accident his beloved sacred deer. At last we should not forget the olive tree, which gave godess Athena the victory over Poseidon at their dispute for the protection and name of the city of Athens. Of course very determinative for universal history was another tree, the Tree of Wisdom in the gardens of Eden.
The importance of nature and particularly of trees for mental health and life quality improvement in urban areas is best shown with the Big Tree Plant program planned by the government of Great Britain. According to that program, approximately 4,2 million pounds will be spend the next four years in order to plant one million trees in urban, mainly downgraded areas of Britain. Specialists estimate that great benefits will result for residents' health while one of the positive effects they expect are lower driving speeds since the presence of trees is acting relaxing. A Dutch study suggests every 10% increase in green space can postpone health complaints in communities by five years.
In aromatherapy many essential oils coming from trees are used: tea tree, eucalyptus, rosewood, sandalwood, juniper, cypress, frankincense, myrrh, etc. Also, we must not forget oils used for dilution, such as almond oil, walnut oil or olive oil, which too come from trees and contain valuable beneficial constituents.
The case of sandalwood is very indicative of the lack of moderation characterizing human nature. In India, Australia and the islands of Pacific Ocean sandalwood has been used for centuries, for the production of perfumes, medical preparations, carved decorative and worship objects. Unfortunately due to excessive exploitation Indian sandalwood (santalum album), which is considered to be top quality, is currently a threatened species and the price of the respective essential oil is accordingly high. In India and Nepal all sandalwood trees are now owned by the government and their exploitation is under strict control. However many trees are cut down and exported illegaly.
Trees may seem to us helpless the way they are ground into earth, but in reality they are very active organisms and there is proof that they are using chemistry in order to communicate with each other and defend themselves against their natural enemies. When trees are being attacked they increase the production of tannins, bitter polyphenolic substances, which can sicken or even kill animals when consumed in big quantities. As Valerie Ann Worwood mentions in her book "The Fragrant Mind", during a study that took place in Africa some trees were slapped with sticks in an attempt to resemble the effect of strokes from deer and other animal. After fifteen minutes the species Acacia caffra raised its tannin production per 94% while Rhus leptodictya per 76%. Trees came back to their original state after 24 to 100 hours. In fact, trees close to the ones that were hit but with independant root systems raised their levels of tanin too, which indicates that trees have a mechanism for communicating with each other, perhaps via air transportable chemical elements. 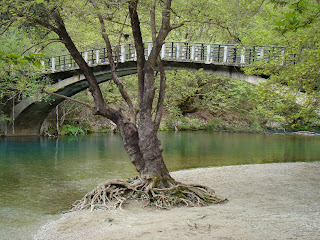 The last few years we often read and hear that human psychology and emotions are influenced in great degree by our body's chemistry and hormone flow. Who knows, maybe in the near future scientific research will prove that trees have also feelings, since chemistry is governing these organisms as well. Anyhow, I can assure you of this: if you hug a tree, putting your arms around its trunk and leaning your cheek on it, you will get a feeling of complete calmness and relaxation. In order to enjoy this experience even more, stay at this position for 5-10 minutes with closed eyes, breathing in deeply the fragrance of the wood and mentally wandering to the parts of your body in contact with the trunk, starting from your head and resulting to your feet soles. This "grounding" method will help you empty your head from stress and negative thoughts, your body will fill up with vital energy and your soul with good mood.
If it is not possible to get your arms around a tree, a good method to relax, regain courage and energy is to meditate, fantasizing that you are the tree. To create an atmosphere similar to that of a wood and benefit your respiratory tract, perfume the room with essential oils of cypress, eucalyptus or juniper. Stand tall with your arms in the air and your legs slightly open and imagine that your legs are roots and your arms branches. With every breath think that your limbs are extending higher towards the sky and deeper into the ground. While inhaling feel all the vital energy of the sun entering your body through your hands and when exhaling let all your stress, fears and negative thoughts go through your feet. Continue this process for as long as you feel necessary. After the end of it you will feel like coming back from a ramble with the Ents!

The pictures are from the banks of river Voidomatis, Epirus county, Greece

Two amazing books about trees that contain wonderful pictures, information about their botanic properties, the therapeutic use of their various parts, the symbolism, mythology and local stories that surround them.

For children aged 6 to 12 a book with photos and icons explaining a tree's life circle and its significance to the environment, the animal and human activity.